Each Thursday session includes a short talk. Suitable for those who want to sit together in silent meditation. Come and join us.

Buddhist teaching and guided meditation session with Ajahn Barry Subhaddo. Suitable for both beginners and seasoned meditators. Everyone welcome. Ajahn Barry Subhaddo says:
I first came across Buddhism in Sri Lanka in 1973 whilst travelling from Australia back to the UK.
When I arrived back I found the Buddhist Society in London which for me was a landmark in my life because Buddhism seemed to make complete sense to me.
After spending about a year and a half looking at the Tibetan tradition, the Theravada tradition and meditation in general, I went to a certified Rinzai Zen teacher not because it was Zen but because the teacher had been through the formal training in Japan.
After spending about twelve years in the Zen training, I met and felt a great admiration and affinity with Laung Por Sumedho.
I moved into Amaravati monastery and took on the responsibility as co-manager of the retreat centre.
After spending about two and a half years as a layman in the monastery, I left and started up my gardening business again but after a while I felt that I had to ordain as a Bhikkhu so I spent eighteen years in the monastic system.
I now have moved to southern Spain where I live a remote and quiet lifestyle.
I disrobed in 2019.
Once you have registered, we will send you a link to the meetings via email. We look forward to seeing you. Event Details: All meeting times are 🇬🇧 GMT. If you are not in the UK, click here to see different time zones on the world clock. Golden Buddha Centre Zoom Channel. 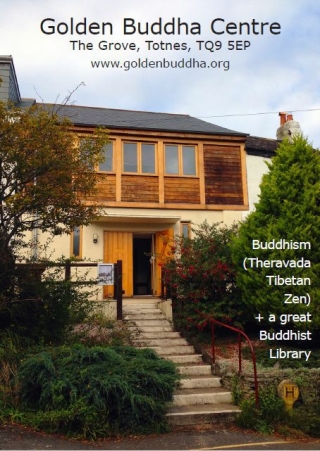